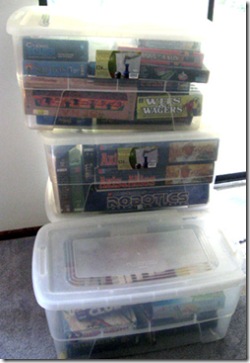 Now on to games – I love games, I love playing games – games that involve two or more players. A game you play by yourself is really more of a “puzzle”, skill builder, or simulation. And while I have played games that use a single player, I lose interest very quickly when other “real people” are not involved. There is nothing wrong with “solitaire” style games, Suduko or word puzzles, or Rubik’s Cubes but I like multiplayer games where you are face-to-face.

So here we have 4 of 5 game “tubs” that I am now going through to figure out how to store and which ones to keep.  If you look closely you will see classics like  Clue, Stratego, Axis & Allies, Civilization, Risk, and the like.

You’ll also see some “European” games like the Settlers of Catan (and variants), Carcassonne, El Grande, etc., also Empire Builders, RoboRally (the original), Terrace (from StarTrek TNG).  And, obscure titles like Cosmic Encounter, Kill Doctor Lucky, and others.  Yes there are “normal games” like Monopoly, Scrabble, Chess/Checkers, Othello, Sequence, etc. and card games (pretty much all of them, Uno, Phase 10, and Split being recent favorites) in our home, but I don’t have to store those (except more obscure ones like The Great Dalmutti, Once Upon a Time, and Guillotine).  And some newer games like Wits & Wagers (think trivia mixed with Texas Hold’em).

Now I am not in nearly as bad a shape with games as I am with books, but I still probably have too many.  If we played a different game each week, we could go over a year without repeating (and what is the fun of that (not repeating)).  The problem with deciding which games to get rid of is what should the standard be?  How long since you last played them?  How hard they would be to get again should you “need” them?  The cost of the game (some are cheap, some are not)?  I did cut a good third of the games over the last few years so all the easy ones are taken care of.  There is even one I wish I could get back.

I think I just need to find a better way to store them, and maybe put a “sticker” on each box with today’s date and remove it when we play the games, thus tracking which ones are really used and are worthy to store.

Anyone else have a similar issue or solution?