Howtoons: The Possibilities Are Endless!

I had forgotten that I preordered this book from Amazon but it came in the mail on Friday and I read through it over the weekend (also got a LEGO Droid Development kit off an eBay auction, but that is another story).

The Howtoons book is really well done.  You can get a basic idea of the premise of the book by visiting the Howtoons site online or looking through some back issues of Make magazine.  But basically it is a creative way (comics with a story) of getting kids actively involved in working on hands-on science and construction projects. 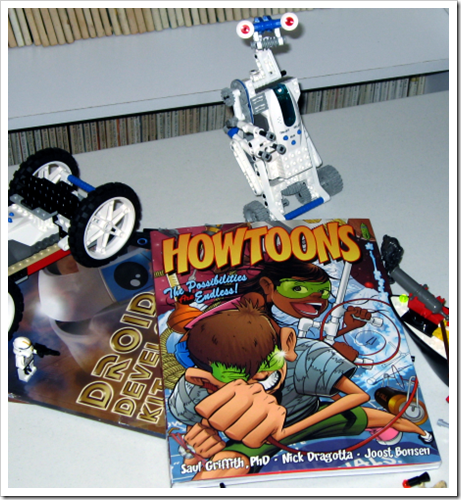 One of the things that was a very positive surprise about the book, was that the book was not just a recap and compilation of their existing strips (which would have been worth the price anyway).  They also got into the whole “background story” of what helps enable kids to be creative and constructive.  There are a number of pages written (and drawn) to promote the idea of kids having a “workshop” (or just a workbench) where they can work on projects, and where a little bit of paint or glue would just “add character” to the place rather than “mess it up”.   They also cover building up a good “tool bucket” and have a nice section on making and using protective eyewear for safety.

On top of that there are some great projects to build.  The Marshmallow Shooter that we did this summer is in there.  Also there are bigger projects like the pop-bottle-water-rocket that may have to wait until spring to try out (been wanting to figure out the best way to pressurize PVC with a bike pump anyway).  This strip is another good example of telling the whole story and not just giving instructions.  They discuss several failed attempts at pop-bottle rocketry by the characters before their eventual and dramatic success.

I rarely recommend books to people (because everyone is different) but I did wholeheartedly suggest getting the Dangerous Book for Boys earlier this year.  I’ll back that up by recommending this book as well for any 7-16 year-old boy or girl who likes to build and experiment with things (with definite adult supervision for the younger kids – but that’s half the fun anyway).