I spent most of Saturday at the regional FIRST Lego League Robotics competition in Grandville (pics). It is a competition of 9-14 year old kids who have spent 8-12 weeks working on Lego robotics programs (and much much more) to solve the yearly theme called “Power Puzzle” and related missions.

While Legos and Robots would certainly be more than enough, the actual robot performance is only a quarter of the total possible scores.  They had to do a project (this year an energy audit of a building – lots of work), present it to the community and then also at the competition.  They have an activity and interview to determine how well they work together as a team.  And they have technical interviews to determine what they have learned about the theme (this year – energy conservation and alternative energy), building and programming robots, and to make sure all the work was done by the team and not the adult coaches and mentors.

I’ve been to more academic competitions than I’d want to admit, but this tournament had more a feel of a big athletic event.  Lots of energy, scoreboards, buzzers, judges, referees, and kids running every where – great!

Overall a very worthwhile group that I am trying to figure out how to get more involved with next year (too many great and important things to do).

A special “shout out” to team #22, Legos in Paradise who took 2nd place and are one of the nine regional teams on their way to the state competition in two weeks. 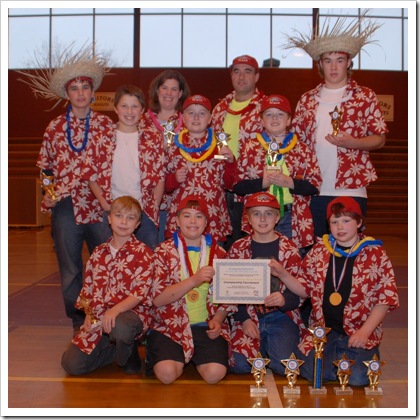