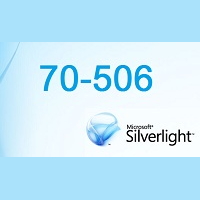 Microsoft released it’s long awaited (very long awaited) Silverlight Certification (MCTS 70-506) earlier this year.  It was reportedly held up several times as Silverlight transitioned from version 2->3->4.  There was enough new in Silverlight 4 that the wait was worth it and now the test is out. Having been working on Silverlight projects for years, there has really been no certification test to take as a credential, though I took the WPF 70-502 test as it was the closest technology to Silverlight that was available.  But even having been through the WPF test previously, and working in Silverlight for several years, there are still some details that are worth reviewing before you take the test.  If you are thinking about taking the test, here are some things that I found that were helpful in studying and passing the test.

p.s. Why might you want to take the test? First you can personally get a MCTS Silverlight (which is nice to have a current certification), also if you are a Microsoft Partner, this fulfills part of the Mobility Competency (along with the 70-599: Pro exam for WP7 – which is supposed to be out by now?), and most importantly, you gain depth – I always learn several things when studying for an exam which I am able to use fairly soon afterwards.

The Prometric/Microsoft testing agreement prohibits publishing actual test questions or summaries of the test itself, so I really should have written this yesterday while I was still preparing. I will try to recall the info without sharing anything that would violate the NDA on the test.  Good resources to review:

2) Preparation Materials – nada, there are no online learning, books or practice tests that I could find yet – by the time these get out we’ll be at Silverlight 5 – bummer
3) The guys at Silverlight Show did a good 7-part blog series on preparing for the test – this was quite helpful to review.  They have been going over a prep guide for 70-599 (WP7) test as well which I plan to read and take soon.
I am debating my next test, but I do have a summer goal of taking one more – probably WCF to fill out the MCPD certification.  Anyone who is interested in the WCF or WP7 tests, that wants to study together (online or in person), let me know in the next couple weeks.