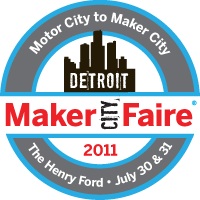 I was able to attend Maker Faire Detroit 2011 this last weekend at the Henry Ford Museum in Dearborn, MI. It was an amazingly full day from 9:30 in the morning to 5:30 at night (with a 2.5 hour drive on either side of that), but well worth it.

Maker Faire is a difficult event and concept to explain, but there is a lot of great information on the web describing the event.  I’ve described it as “think of a Science Fair, but for both kids and adults and multiply that by 1000, and you get close” – you’d still need to add in a few dashes of “State Fair” and “Carnival” and even “Music Festival” and maybe a little “Car Show” and “Star Trek Convention”.  The main idea comes from the idea of a “Maker” and/or “Hacker” meaning people who love to invent, create, innovate, merge, and modify just about anything – from electronics and technology, to machines, to transportation, to food (growing/preparing), and inventors and tinkers of all sorts.

I’ve been a subscriber of Make Magazine from O’Reilly  (the main sponsors and organizers of the Faire) since the premier issue. We’ve had a great time making several of the projects over the years from Make, and want to do even more – even more so after the event this weekend.  This is really why I believe that the Maker Faire was an amazing success in my opinion.  We left the day with all kinds of ideas and desire to go out and create new things – with more questions than answers but inspired to see what we could do – and I really think that was the whole point of the event.

The short story, and “take-aways”, from the day are probably this:

When we approached the Henry Ford Museum at about 9:15 the traffic was already stopped about a mile or so away for parking, and I really wondered how this would work.  You see about 50-75% of the Maker Faire was outside in the parking lot of the Henry Ford Museum – taking up the entire regular parking lot.  But fortunately the Ford Corporation owns the properties across the street and we were able to use all of their parking lots.  Still, the long lines (moved quickly) of cars, and then the growing swell of people added to the initial excitement of the day.  Plus, during the walk down to the entrance you could see some of the larger elements of the Fairgrounds including the race track, MouseTrap, and huge mechanical fire-breathing dragon.  After getting our tickets we started in a tent that was sponsored/manned by the Ann Arbor Hands-On Museum.  This was a a great start to get you thinking a bit like a scientist/inventor and was a good example of how the day was intended to be much more “hands-on” than just a passive experience.

The “hands-on” nature was further emphasized as we all signed a safety waiver and got a bracelet before going further (not an experience for the timid, or a “padded playground” here). 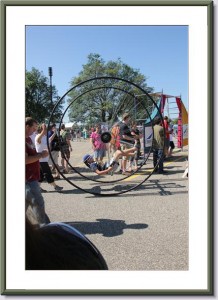 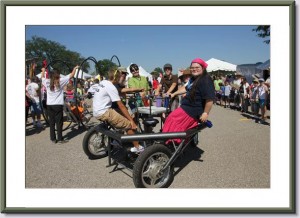 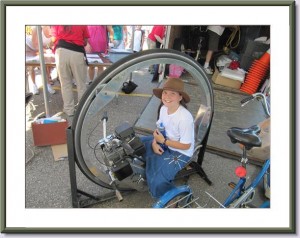 The first area we explored included just about every kind of wheeled transportation imaginable – and nearly all were hands-on (with a bracelet). These included bikes with tires that were 10 feet high, we fit all of us on a “bicycle built for 7”, and Anna sat in (but didn’t ride around this time) on a motorbike where you actually ride inside the wheel.

The “Maker Shed” (and there were several large “circus tent” style areas with different exhibits) was really the “science fair” feel part of the Faire.  We saw everything from embedded electronics, to plans for backyard geodesic domes, to solutions to cast/mold props for movie sets (including masks and forms to create any kind of alien or creature). 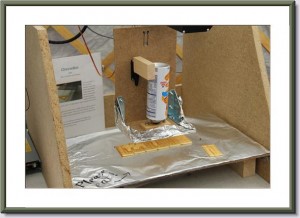 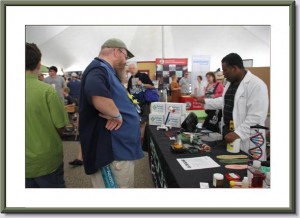 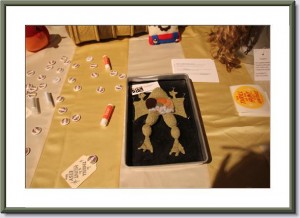 A few examples … yes, if you look closely, that is an “Easy Cheeze Printer” that you could print your name in cheese on a cracker.  Next is me talking to a guy who really reminded me of LeVarr Burton explaining how he used a fairly simple process to work with kids to create BioFuels from corn and other organic materials.  And, at first glance you might think that is a frog undergoing dissection, but actually it is an art project representing a frog dissection using knitting (did I mention there were a huge number of crafts and craftsman at the Faire?).

We took a planned break from the heat (95 in direct sunlight for most of the morning) and went inside the museum (air condition break) to the Live Stage area. 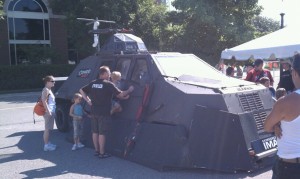 This is a highly modified SUV with heavy weights and ground effects (to stop the tornado from lifting the vehicle).  The “turret” on top is actually a mounted IMAX camera which enabled him to get some never-before-seen-and-lived type footage from the base of a tornado cell – which just happened to be showing at the IMAX theater in the museum as well.

We stayed through the following presentation which was a very well assembled and produced effort by Maria Anderson from the LIFT Institute at Muskegon Community College.  She has graciously put her presentation and video online at http://edgeoflearning.com/?p=2920.  She walked us through a model where really life-long learning can be achieved using a “Maker Model” of learning, reflecting, tweeting, collaborating, blogging, reviewing and continuing on in a cycle of continuous investigation and learning.  This is the kind of thing that really makes sense when you talk about it.  The “Free Range” style of learning could replace a more “Caged/Factory” style learning that exists in many institutions today.  Free the learner/creator and let the learning and creating flow.  Some very fun, cool, and encouraging ideas (with some actual research and backup to support it).

After a nice lunch and a chance meetup with some old friends (hey Bill and Ethan!) we headed outside to view the MouseTrap and the Power Racing Series. 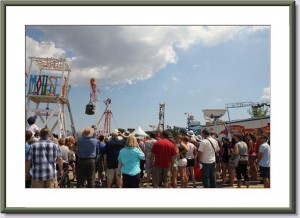 The MouseTrap really escapes easy description – if you’ve seen the board game, and can imagine scaling everything up to “people-size” (i.e. the marbles in the game are now full-sized bowling balls and the crane/towers in the game are now 3-5 stories high) and then you add a carnival/gypsy-style music/performance, then you can approach what we saw there.  It was very cool seeing how they geared, and levered, and propelled, and dropped, and flung around the bowling balls through a “Rube Goldberg” style machine that ended up dropping a 2-ton actual bank safe to simulate the smashing of the mouse in the trap.  The “take away” from this was probably that anything in your imagination is possible, even if you have a fairly twisted imagination, and as long as you have a lot of time on your hands. 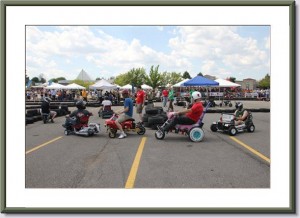 Right afterwards it was on to the Power Racing Series races.  This was really fun, and something it would be fairly straightforward to get into.  Imagine (or if you were there remember) taking one of those Power Racer toys that kids have been getting for Christmas over the last 5-6+ years – you know the ones like the Jeep or Barbie car that looks like a mini-version of the vehicle but runs on a rechargeable battery and goes 1-2 miles per hour and runs over pets, etc.  So get a used Power Wheels vehicle (people nearly give them away when the first battery runs out or they have to store it for a season) and spend up to $500 fixing it up (save the receipts, re-use/recycle parts to save money) and then race it against a bunch of other crazy people who are doing the same thing.  This means hacking these toys to go 15-20+ miles per hour, with actual rubber tires, upgraded motors, welded up frames, and more (but clearly little “wasted” on safety devices).  It was a very entertaining event (with bonus points given for crowd-pleasing performances (even if you “lost” the race)) and, again, a success because the discussions of “we could do that” or “how did they do that” or “I think my cousin has one of those in the attic” started almost immediately.  Competition, fun, and engineering hacking – all coming together in a really fun event – win-win. 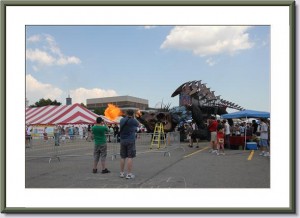 MLive got some good video and follow up on this here.

Heading back inside we visited the First LEGO Robotics and FRC (full-scale robots) display. 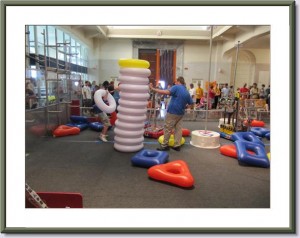 The FRC bots were demonstrating their ability to recognize different inflatable rings and shapes of different colors, and manipulate them in many cool ways (shown here stacking just the circles).  These were quite impressive.  The contrast here, to me, was that the budgets for teams like this are in the $10,000-$40,000 range and the time they spend on the projects is in the 100s-1000s of hours.  Still quite impressive, and an accomplishment to be sure, with an obvious contrast with the Power Racers outside.  The nice thing about the Maker Faire is that it has the whole range of items and projects from the Makers/Hackers (e.g. Power Racers) to the higher-end Engineers (FIRST Robotics). 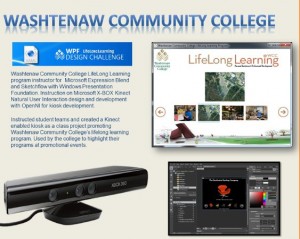 Finally found the Kinect with Lifelong Learning exhibit built by friend and hacker Don Burnett, but just in time to miss him at the event.  They created a very fun (with a nice line up to try it out) kiosk with a Kinect that Washtenaw Community College has built and used to foster education and creative thinking.

Coke Zero and Mentos to end the Day 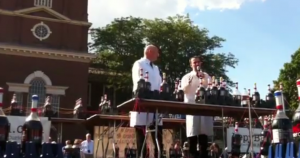 Right at 5:00 the guys from Eepybird gave a wonderful educational and entertaining presentation on the wonderful world of Coke Zero and Mentos eruptions.  Throughout the day kids were able to shoot off a Coke Zero Rocket Car (Anna’s shot out over 200ft – the temperature supposedly has a lot to do with the reaction).  At the end of the day there was a “performance” including 160 or so bottles and 600+ Mentos.  I found a nice YouTube of this event here.

I’d really like to make this an annual trek to “The Faire”.  It was fun, entertaining, thought-provoking, and really encouraging to the creative and adventurous parts of all of us. A good goal would also be to plan to not only attend in the future, but also participate/present in some way in the future. That is really the key part of a community – the give and take that makes us all better because of it. It would also be interesting to see if we couldn’t do a smaller scale version of this somewhere in West Michigan, or even very scaled back with just a small group to get started. Interested? Let me know …