I’ve been wanting to find the right time to try out some of the HOWTOONS ideas (if you haven’t seen them, they are well drawn fun ideas for cool construction projects), and the Labor Day weekend seemed like the perfect chance.  So on the way up north we picked up 10 feet of 1/2″ PVC pipe and enough ends, elbows, and “t”s for 5 Marshmallow Shooters (oh and 2 bags of Marshmallow “ammunition”). 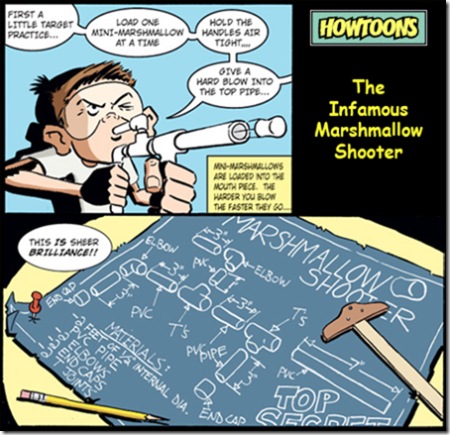 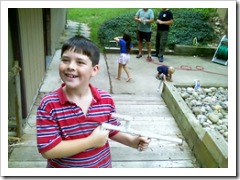 We made up 5 “shooters” in about 10 minutes (which comes to about $1.60 per shooter) and had just enough PVC left to give Joey a 11″ barrel instead of the standard 7″.

The trick is to put the marshmallow right in the mouthpiece and not in the barrel (says so in the instructions if you actually read them).  You might not think the marshmallow will “find the way” through the two turns and “t”s but it does, and picks up some amazing speed along the way.  One other change we made after the first one was to extend the length of the piece that connects the barrel to the mouthpiece, from 1″ to 2”.  1″ was just a little too short to always have enough PVC to have a nice connection between the two pieces.  Oh and there is no PVC glue/cement involved – just the pieces stayed together well enough (and enabled you to put a stick down the barrel if a marshmallow got stuck (usually when someone tried to put 3-5 through at the same time – rapid fire).

Accuracy is pretty good with the standard shooter – even better with a little longer barrel.

Of course Uncle Kenny and Joey had to “super charge” their’s by adding the compressor.  With little modification shooting some marshmallows over the house wasn’t even a problem – interesting to see how marshmallows fly. 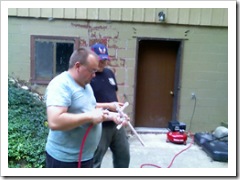 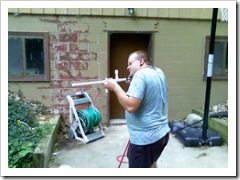 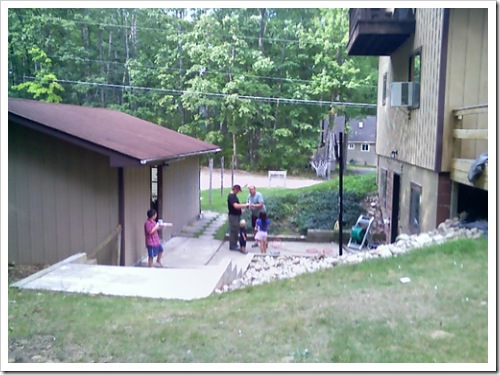 If you look closely at the bottom image you will see some white dots across the landscape – this is really the only issue with this project.  There are quite a few marshmallows on the battle field (or target area) when you are done (and on your shoes as well).  Luckily they breakdown well with water. 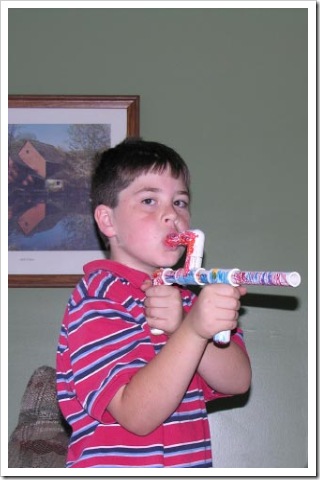 One other tip – the kids will probably want to mark and/or decorate their shooters.  Permanent marker works well on them, but not perfect.  PVC isn’t very porous so the “permanent” marker can come off, especially right after decoration.  So you are better off not decorating the mouth piece or handles if you intend to continue using them afterwards (gets a little messy).  Oh, and no shooting indoors (but you can pose for a photo).

Overall they were surprisingly fun and well worth the time and little money building them up.  The final discussions were about what other modifications could be done to improve power and accuracy, and there are already plans to have a follow up meetup after we make some modifications.