Thanks to Chris for the heads-up on the $50 (after rebate) “cyber-Monday” memory deal at NewEgg – arrives on Thursday, can’t beat that. 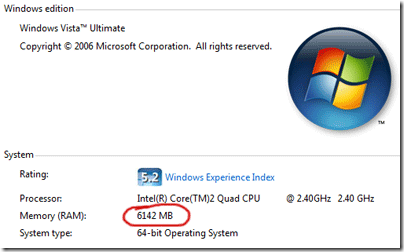 It is strange how much pressure I feel now having a system I could only dream about even 3-4 years ago.  It is a lot of responsibility having so much raw computing power.

I spend the majority of the time reading and writing which my Windows 98 computer did just fine with an old Pentium 3.

To make it worse I have the Vista Sidebar gadget going that monitors CPU performance.  Most of the time I have one of the four guys chugging along or spiking for a second or two while the other three take a nap.  They seem to spread out the work pretty well sometimes, but other times a couple team up on a task and leave the others out of the game.

It’s weird (and cool) that today when I’m wondering what to do with the extra power, Microsoft announces their new Parallel Extension to the .NET Framework.  This enables programmers to explicitly design and code for extra processing power.  There are parallel ways to do loops (for/foreach), parallel data access (with LINQ even), and more.

I downloaded the samples and started playing with them tonight, and they are very cool.  The examples are classic CPU-intensive tasks like matrix-math, ray-tracing, searching, sorting, solving Soduku puzzles (some are very hard). 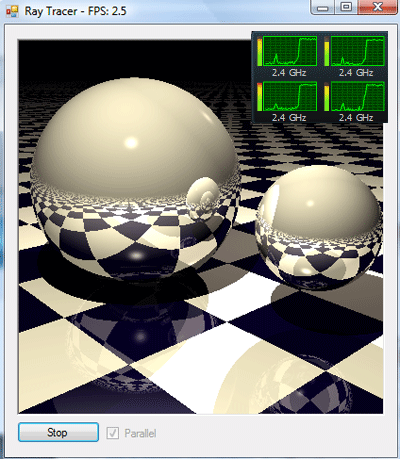 It is satisfying to see all the processors spike and the memory get eaten up (still haven’t crossed the 4Gb threshold yet.  Tonight was all about making processors “dance”.

I have a project right now that this would be terribly useful on, but the OS and hardware are already in place – lowly 2Gb dual-core server 🙂 – and you need .NET Framework 3.5 (plus these CTP (i.e. pre-release) extensions) to make it work.  Maybe next time.

Now I just need something practical (not that computing pi to 1,000,000 places isn’t interesting) to code for practice – any ideas?  I know I can always help fold proteins and search for hidden space aliens, but I want to create something to test the technology and learn it for myself.