When was the last time you heard someone say, in real life, that something "delighted" them, or it was "delightful".  If you are like me it has not happened in recent memory.  But the word seems to keep coming up on vacation so I’ve been thinking a lot about it.

I’ll go with this tangent for a second.  Brazil is on "summer vacation" right now and there are work-study groups that bring college-aged kids to the USA as tour groups (for fun for a while) and then they work in the park until late March when they return home at the end of their work/study visa.  This seems like a huge win-win for all – there are tons of paying customers at Universal from Brazil (they even have their own printed materials, maps, signs, etc.) and there are nice student workers who speak the language and are willing to put in the long hours away from home.  I got to speak to several of them this week and my view has changed a bit about what it means to the economy in the USA to have foreign workers (here legally, paying taxes, etc.).  The issue is much deeper, but the many hundreds of Brazilians here, for the most part, were very well received.

Anyway, back to "delight" – the first mention of it was from a British woman speaking about how enjoyable one of the rides was.  (BTW, some of the British families here make "the Dursleys" look well-adjusted).  Next came this kiosk. 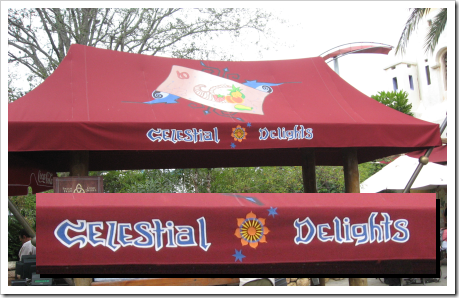 It was a "fruity drink" vendor (hard to keep hydrated in the 82 degree heat …. how’s the snow?) And it occurred to me that the word "delight" often comes in the context of food (e.g. Turkish Delight).

But what does "delight" mean?  Why isn’t the word used much?  It seems antiquated or "stuffy" when you say it out loud.  I think there is something here though – something that has maybe been lost and needs to return.

I am hooked on the word – I want to "delight" people with the work and things that I do.  I want to do more than "meet expectations" and have people be visibly pleased with what I’ve done.  Don’t want to "shock" people or "surprise" people, but go the extra mile and bring a smile to their face.

I’ll write more on this once I’ve thought it through a bit more about it – I have some ideas.  It isn’t easy, and takes extra time and effort.  But it certainly is hard to compete against, and would be impossible to automate or outsource, and is just plain good for everyone.

Headed for the beach for 4 days, and then on to Cape Canaveral for a hopeful launch of STS-122 (watching a bent hose that has got some attention lately,and then back home.  See you soon.