Well the last "missing piece" of our vacation arrived today – the passes to view the planned Space Shuttle launch on February 7th. I was worried that there were only 3 days left for them to come UPS, but they made it today!

I know Shuttle launches are often delayed – this launch has already been delayed at least three times.  So if we can’t see the launch on the 7th we’ll still do the tour, IMAX movie, visitors center, etc.  But I would really like to see the launch in person. 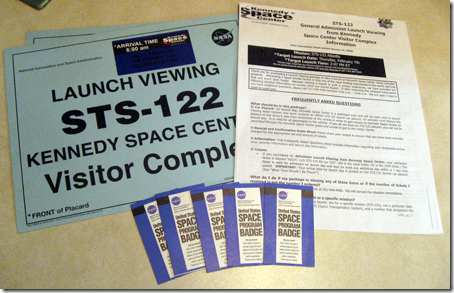 The packet is much more involved than I thought.  The launch is scheduled for after 2:00pm, but they want you to get there by 9:00am.  No one is allowed into the access roads on the day of the launch without a placard in the front window.  Then you need a photo id that matches the names on the tickets and a whole bunch of security precautions that make the TSA sound reasonable.  No bags or backpacks of any kind, metal detectors, purses if necessary but with a full search, and all the "pointy stuff" restrictions (but you can bring a telescope).

They lock the gates two hours before launch and no one can get in or out until an hour after the launch.  I am glad it is not summer and "only" 70 down there – most of the waiting and all of the viewing is outside basically in a field.  A whole lot of waiting for a pretty cool event.  I guess they have a big-screen outside with close-ups and all the launch info.  We’ll be about 9 miles out and be able to see the Shuttle launch as it clears some trees.  Other folks can take a bus in a mile closer with a direct view of the launch from a bridge.  But at least at the visitors center there are food, activities, movie theatre, bathroom, etc.  I can’t imagine sitting on a bridge for several hours – but a direct line of sight would be cool.

So hopefully I’ll have some photos (or video?) to share of the launch – if not, at least some shots of where it would have launched from :-).