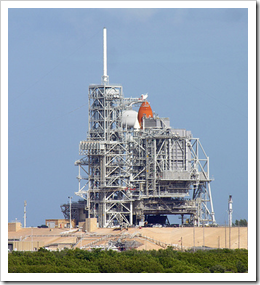 Well it is easy to say that one of the highlights of my Florida vacation was the launch of the Space Shuttle (STS-122).

We visited the Kennedy Space Center the day before the launch (which is an amazingly worthwhile trip even without a launch if you are in the area).  Having been to Universal Studios the week before, much of what is at KSC was very similar.  There are "edutainment" shows and 3D movies (IMAX and on stage), rides that simulate the Shuttle Launch, expensive food, and lots to do.

The more interesting parts  to me was on the bus tour (3-4 hours worth at three different stops along the way).  I wont detail all the stuff in this post, other than to say that the first stop was quite close to the Shuttle launch pad (39b), the second is at a building where they completely enclosed and restored a full Saturn V rocket (amazing), and the last is the Space Station prep and assembly building.  The amazing thing about this last stop is that you actually walk through a glassed in hallway overlooking the actual assembly of the final Space Station parts (can’t even use flash photography (no-flash is ok) because you could damage some of the components being assembled).

The thing that struck me the most about the whole experience at KSC is how "possible" all of what NASA is doing seems to me now – in contrast to when I was there last (30 years ago).  None of the science, physics, chemistry, engineering or computer processing seem as unattainable or "magic" as they once did.  Newton’s laws make sense, Oxygen and Hydrogen combine and burn in powerful (but understood) ways.  Radar and GPS systems can track things well.  Computers can process millions of instructions per second (in a $300 game system now). Think about the Shuttle – it is basically 1970/80s design and engineering brought forward with some advances as needed.  The Shuttle fleet is being retired very soon – Atlantis will soon become "spare parts" for the rest of the Shuttles (this is one of its last flights).  They are even "reverse engineering" much of the Saturn V technology to help design the new Ares series of launch vehicles for future missions.  I mean the amount of brainpower and ability needed to safely get people to space and back is still amazing (astounding really) but now it seems like it would just be really hard to accomplish, not impossible.  When my kids talk about possibly being part of the missions in the 2020s and 2030s I tell them that it is really possible – and mean it – more on this later.

On to the launch. We were able to view it from the Kennedy Space Center the next day, about 7 miles from the launch site.  We got there really early (too early) at about 7:30am (passes said no later than 8:00) and got a great parking place.  We went in and picked up the IMAX 3D Space Station movie that we passed on the day before.

We were told there was about a 25% chance of launch that day.  The weather accounted for most of this (a cold front coming through with rain) and the pressure sensors that had failed several times before were still "iffy".  I decided to park in the bleachers by the countdown clock and "jumbotron" and watch the whole thing unfold throughout the day.  There were many astronauts and other NASA folks sharing information and experiences and it was really interesting.

But 5 hours in 86 degree heat in direct sun wears on you after a while – especially when you are from Michigan and not used to the heat.  My wife and kids left me early on to see some shows and stay out of the heat.  I gave up after the astronauts were settled (the sit there for 2+ hours after they are hooked up basically doing nothing – one astronaut who was speaking told us he slept for most of that time (which I found hard to believe).  He shared a great story I should recount sometime later.

Finally it came to time for the launch – all the weather had blown north, the sensors held up just fine, and we were 9 minutes from launch.  We found a good place to view from and waited.  The countdown came and then it happened.  Wow.

I’ve seen many launches on TV but always wanted to be there live and I have to tell you it is something that is nearly impossible to express in words, pictures, or even video – but I’ll try.

The first thing I noticed as being different than all the other launches I’ve seen is the fire coming out of the rockets – no picture can really capture it.  When you view a picture or a poster on the wall you really only see the reflected light from sources in the room.  When you view a computer screen you see light transmitted outward in different colors.  To really understand how the fire looked you need both.  A fully illuminated poster for all the details of the sky and the trees and the smoke, but also a source of light nearly as bright as the sun coming from the rocket like the flame of a candle in a dark room.  It was strikingly bright – it’d be "overdone" if it were a special effect – too bright to look at for very long.  You just get captivated by it watching it go up until the fire is obscured by the clouds of smoke as it gets higher up.

The other thing that really struck me was the sound – even miles away you really "felt" the sound more than "heard it".  It is said that any living thing within 1000ft of the launch pad will be killed by the sound waves alone (the birds know when to leave).  I imagine an 10,000 watt IMAX THX 10,2 sound system could start to approximate what it sounded/felt like.  You also notice the sound trailing off as the Shuttle gets higher and higher up.  Very cool.

We were also able to see the solid rocked boosters (SRBs) detach from the shuttle and fall, like little white specs, back to the earth.  We’d seen that several times the previous day in the Shuttle Simulator and models, so to see it happen live was a real treat.

One other unexpected result of coming to the live launch came much later on that night when we were going to the pool back at the hotel.  It just-so-happened that we were staying at a hotel that NASA had put a number of people up at and we had noticed the meeting notices in the lobby for NASA,USA (United Space Alliance), and Boeing.  When my daughter and I were fetching her goggles from the room we ran into an older man getting on to the elevator.  He had a STS-122 embroidered shirt so I asked him if he had seen the launch earlier that day.  He said "yes" and that his son was one of the astronauts who was on the Shuttle that day.  He was clearly experiencing many different emotions all at one time – I shook his hand (in my Coco Beach t-shirt and swim trunks) and congratulated him.  My daughter looked at me and said something I don’t really recall exactly, but the idea of it was "So you said we could actually be involved with space missions in the future, and that guy’s son just took off – that could be you in the future?" "Um, yes, that’s right ….."

Sometimes we tell kids that they can go as far as their talents, gifts and determination can take them, and to be honest sometimes we (I) say it half-heartedly or just simply as encouragement.  This day it became very real.