Another tool I use almost daily for documentation and presentations is Window Clippings, by Kenny Kerr.  There have been screen capture utilities out there since … well … since there have been screens, so why is this one different?  There are several reasons.

First, as with other really useful tools, Window Clippings integrates seamlessly into your system and just seems to become part of the operating system.  I hit “PrtScrn” and get Window Clippings.

Second, it does the most common things I need with a simple click of the mouse.  Most often when doing a screen capture you are selecting an entire window – Window Clippings knows this and lets you select a window directly.  Also, it is “Vista Friendly” – what I mean by this is that Vista introduced all kinds of transparency and “Aero” features which can lead to other windows (or your desktop) bleeding through transparent areas on windows that end up in your screen capture.  Window clippings isolates the window clears whatever is behind the window from the screen capture.  Nice clean window capture.  After selecting a single window, the most common thing I need is to capture a section of a window (or the entire screen).  Window Clippings lets you crop or expand the capture area before you capture the image so you only get what you want.

Third, Window Clippings gives you options of what to do with the captured image. 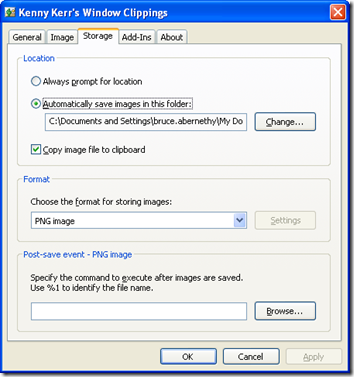 You can copy the image to the clipboard, save the image to a file (even pick the file type – PNG, JPEG, TIFF, BMP), and even add a “post-save event” to post-process the image once you have taken the picture (never done that – sounds interesting).

The last thing I really like about Window Clippings is the ability to set a time delay before the picture is taken (kind of like the timer on a camera).  This lets you set up things like opening menus initiating pop-up windows or other “strange behavior” on the computer that you couldn’t capture with a keypress (i.e. the keypress would either not get through or would take focus away from what you were trying to capture).

There is a free version that implements many of the functions and may be enough for some people’s needs.  I dropped the whopping $10 for the full version (adds cropping and time-delay, and more).  I can easily recommend this tool to others.