I know Spring Breaks are coming up (or in progress) and people are heading for Florida.  Having just gotten back from a great trip there, I wanted to share a few more things we found there that greatly exceeded our expectations.  This one is Honeymoon Island and Caladesi Island (both Florida State Parks).

If you are on the “gulf side” of Florida, and anywhere in driving range of the Clearwater Beach / Tampa area, this one may be for you … 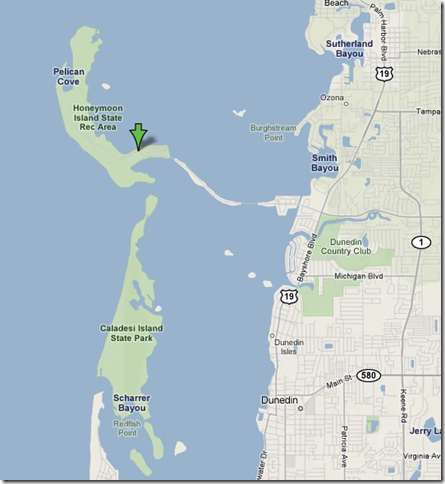 The first thing you will notice about the islands is how (relatively) few people will be there (compared to Clearwater Beach or other public beaches).  This is for, in my opinion, three reasons.  First, it is out of the way a bit – you need to drive a little ways to get there, and it is away from any major city.   Second, there are no hotels, motels, restaurants, bars, etc. on the islands – bring a lunch/drinks with you (or settle for the “snack bar” type food there).  Finally, you have to pay to get in – only $5 per car to Honeymoon Island, add $9/adult and $5.50/child to take the ferry to Caladesi Island (yes you can only get there by boat, but it is worth it (see below).  My point is, you need to make an effort (in driving and money) to get there which many/most people will not do. 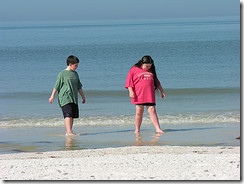 So why is this place so great?  Let’s start with the obvious – it’s the #2 rated beach in the country (and stands up to that rating).  I’ve been to Coco Beach, Daytona Beach, Hilton Head Island, Clearwater Beach, Grand Haven, Sleeping Bear Dunes, and a few others and I can say that Caladesi Island is the nicest beach I have ever been to, by a significant margin. 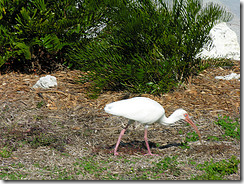 Next, since it is a State Park they have done a lot to not only protect wildlife, but also guide you to see it.

At the entry of Honeymoon Island there is a nature center / ranger station.  There they had a huge deck with a bunch of spotting scopes where we could see herons, egrets, owls, hawks, tortoise and a bunch of other wildlife (even a Nine Branded Armadillo).

The tide was heading out as we got there, and there were more shells (empty and full) than we saw in all our other “shell hunts” combined.  We found many sand dollars and great samples of all kinds of other shells. 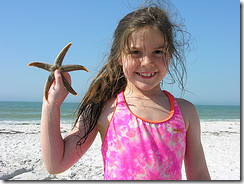 One of the ladies that worked there had found a stranded (living) starfish which we put in a pail and watched for a time.  We put him/her/it back out deeper in the ocean before we left to live another day.

They had kayaks to rent as well as chairs / umbrellas if you wanted them.  This is nice as you don’t have to haul your own over on the boat, or lay on the sand for 3-4 hours. 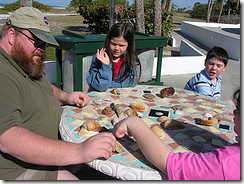 I forgot to mention that. The ferry to Caladesi Island leaves from Honeymoon Island every hour (or half-hour).  The ferry holds about 30-35 people.  Now the only way off the island is the same ferry going the other way, but there isn’t room for everyone who came out during the day to head back after sunset.  So you get pre-booked on the return ferry that leaves four hours from the time you came over.  We came over at 11:30 so we were pre-booked on the 3:30 return ferry.  You can show up for an earlier (or later) ferry, but those who are pre-booked for the return ferry get preference.  So you may have to wait 30-60 minutes for the next ferry if it fills up.  They will run until everyone gets back, but they try to make each run as productive as possible.

So, if you like a great beach, nature, shelling, sunshine, boat rides and a little adventure – then this might just be for you.

Enjoy – let me know if you go – we can share some more stories.