Where does all the money for schools go?

I occasionally break down and have to write about something off-topic that is wearing on my mind.  One such thing is school funding, and that is all over the news lately.  So, quick post – click the back-button now if you were hoping for something more typical on my blog.

So the Michigan budget woes have brought up the issue of school funding again – the Governor wants to cut $100-$200 from the per student payout to try to balance the budget.  This would bring the minimum per-student payout down to ~$7,300 with the average per-student rate in the state going down to between $8,000-$9,500.  Some in the state are worried that this will not be enough to provide an adequate education for the kids in the state.  Everyone seems to be ready to say what they would cut first if money got tight – usually hot-button areas like bus transportation, after-school programs, or even football!  But I haven’t seen anyone explain what it is they do with the money they do get.  Someone has got to know this – please help me out here.

Let me break this down to start the discussion.  In order to do this math I am going to try to use approximate numbers – I’ll try to use a lower/fair number to keep the discussion fair.  Let’s say that students in Michigan get $8,000 each per year for school.

That’s sounds like a decent amount to get an education.  It isn’t a fortune but it has potential.  Especially if you match it with some other students in a classroom.  When I was in school we had about 30 kids in a classroom 5×6 grid of desks – this is too many.  Let’s say you had a classroom of 28 students in it, how much money would we have then?

Nice jump – up to $224,000 – nearing a quarter million dollars for a classroom of students.  Now we are talking.  Let’s say we had a school then with two classrooms per grade K-6.  This is a nice sized school, but not overly big – again, like I remember from growing up.  How much money would we have then?  Well that is 14 classrooms so …… 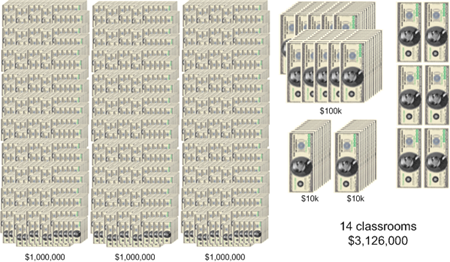 OK, now we are talking – $3.126 million dollars.  Almost took out my computer copying and pasting that many virtual $1000 bills.

So our hypothetical school with 392 kids has a nice budget to work with for the year (each year).  So what do we do with this money – that is what I am trying to figure out.

Let’s pay the staff first – they are the ones that do the work (and many/most do a great job – that is totally not the point of this post).

Again, I said they do a great job – let’s give them a $100,000 package every year for salary and benefits.  Anyone who tells you teachers work a short day and a short year have probably never known any real teachers.  I can tell you from experience that they put in as many hours or more as people who are on the clock year-round.

That takes our budget down to 1.126 million dollars.

We also want a great building.  Let’s build a $4,000,000 building with a 30-year mortgage.  That is about $20,000/month for the loan or $240,000/year.  If you argue that this is too little or miscalculated, also please realize that school districts typically pass a millage (additional taxes) to pay for facilities which are over-and-above the per-student payout every year.

We have to heat and light the place and keep the computers running.  Let’s budget $5,000/month or $60,000 a year for electricity.  The nice thing about schools is that they do get a nice rate on public utilities so this money will go a long way.

What’s Left – Stuff for the Students

So here then is my problem.  We are left with $826,000 per school or about $2,100 per student after we’ve built the school, kept it lit and heated, and paid all the paid staff (lots of volunteers in there as well).

Even if you bought every kid a netbook computer every year ($400) and bought all new textbooks every year ($600) you would still have $1,100 per student left.  That buys a lot of paper, pencils, science experiments, sports equipment, etc.

My main point here is that we are struggling as a state with unemployment and the economy – less people paying taxes on less salaries.  Everyone is cutting back.  All other government programs are cutting budgets.  Schools should be able to do the same without that big of a deal.

To get right down to it – Charter schools have 50% the budget of public schools, private schools 15-30%, and homeschools are on their own – and all of these options continue to produce results.

Let’s ride this economic crisis out together and wait for the day when things swing back upward, without bemoaning the small sacrifices that everyone needs to make right now.