Evaluating the iPad: Consumer vs. Creator vs. Cross Platform 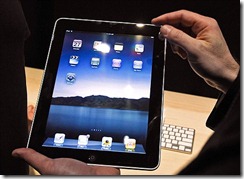 So there have been a few days since the iPad announcement and it is a lot of what people are talking about right now.  Several people are wanting to be first in line to get one of the new iPads.  Others have a lot of questions and criticisms of the unit that was announced. I looked at my own comments and critiques and I think I know why I was personally underwhelmed.

Since the day I got my first Apple][+ I have been programming on computers – you had to back then, there was very little commercial software available for purchase (and no downloads).  I only mention this, because whenever I get a new piece of technology I want to see how I can customize it or extend it by writing some code or “hacking” the unit a little bit (and sometimes have to buy a second unit after irreversibly removing or changing one too many things).  I want my technology to be adaptable and open for me to use in ways perhaps not even intended by the creators.

My three biggest types of customers right now are health care, education and e-commerce.  The iPad is great for commerce – perhaps too great.  If you want to sell audio, video, books, or iPad-specific apps, the iPad is a mini-mall full of shopping opportunities from anywhere with connectivity.  The iPad may be  the device with the most potential for generating ongoing revenue of any device in history.  But for health care and education there are some non-trivial issues.

First, there are 10+ years worth of software written for health care and education that run on Macintosh and Windows platforms.  None of this software will run on the iPad.  Some educational games like Oregon Trail have updated and rewritten their titles to run on the iPhone, but 99% of the software ever written will not run on the iPad.  This is disappointing.

I have also not heard of any way to get software on to these devices other than the App Store.  That is a school or hospital IT department can not stage a standard device and replicate it across many units, and I don’t see the ability to enable/restrict the stock iPad software that comes with the unit.  These are important tasks for tech people in both schools and medical facilities.

I think my confusion and disappointment with the iPad came because I didn’t know if Apple’s tablet offering was going to be a “Macintosh” or an “iPod”.  That is, would it run the full OS X kernel that would allow Macintosh software to run, or would it be the more limited sub-set that enabled the iPhone.  If it was a tablet Macintosh then I could hack/code it with technologies ranging from the unix tools, Macintosh-specific SDKs, Java, Flash and even Silverlight.  Plus, I could use the tablet itself to create software for the tablet – how cool would that be.

My other problem now is explaining these issues to clients who want to create rich applications for their users.  A very typical request from clients is that they want a great user experience and application that will run on Macs, Windows and mobile devices.  It appears that Apple’s philosophy in this area is that there should be a custom version for the iPhone, one for the iPad, one for the Macintosh and (if necessary) one for Windows (and maybe even one for Linux). iPhone apps will run on the iPad in either “mini-mode” or “pixel doubling” neither of which is very compelling. iPad specific apps (e.g. iWork) will probably never run on the iPhone.  If I wrote a great iPhone app, that won’t run on the Mac or Windows.

So if I want my application to work in multiple environments that is 3-5 completely different applications in almost as many different programming environments and languages.  That is a tough sell to a client – this will take a lot more money and require a lot of different talent on the same project (and don’t get me started on code coverage for testing this variety of solutions).

I want to be able to code something once, and have it be portable to as many different environments as possible.  In a nutshell, this is why there are many people clamoring for including Flash and Silverlight on the iPhone and iPad.  These are established platforms with tens of thousands of designers and developers who must now create multiple applications in different environments if they want to support the iPad.  There are finally two ways to create rich applications for Mac, Windows and Linux but only one way to create applications for the iPad.  This is why I’d really love to see support for Flash and Silverlight in the future.  Even if Flash and Silverlight were stand-alone applications that you had to get from the App Store, but allowed you to run cross-platform software within them.  By the way I could care less if Safari on the iPad ever supported either as a plugin.

Unfortunate Choices, But Not “Wrong”

Finally I want to clear one more thing up. Some people have said that Apple should not be “forced” to open up their iPad operating system to alternate programming platforms – legally or otherwise – and I totally disagree.  People can vote on this with their purchases; if they want to consume their content and entertainment on an iPad, and create it on a separate device, then that is perfectly fine.  That is, Apple’s decisions about the iPad are not “wrong” they are just “unfortunate” for me and the people I am trying to serve and support.